In October 1989 I visited the then BBC Creative Services whose remit included the packaging of the new BBC Radio Collection series which was releasing new and archive material on cassette. The following day I was commissioned to do the first two covers of C. S. Lewis’ classic and powerful fantasy, The Chronicles of Narnia. The titles were the legendary, The Lion, The Witch and the Wardrobe and The Magician’s Nephew. Brian Sibley, the proloific writer, dramatist and broadcaster was responsible for the acclaimed dramatisation of this classic for BBC Radio 4. Brian also dramatised the epic Radio 4 Lord of the Rings, a brilliant realisation for radio of another classic. He has also been responsible for several books relating to the Lord of the Rings movie trilogy including the biography of director Peter Jackson. It was very gratifying that Brian is so appreciative of my Narnia work. A compliment indeed.

It was a brilliant commissioned to have and I immersed myself in the stories. Mario Moscardini had briefed me to take a sophisticated approach for a Radio 4 adult audience (that means ‘intelligent’ folks)! As a consequence these first two covers have an allegorical and stylised appearance. I devised the Narnia scroll and lettering which would feature on each cover and it was intended that this should alternate left and right as the sequence progressed.

The roughs were approved and creating the two covers together unified the images making them very much a pair and were delivered to the BBC just before Christmas 1989. The sequence continued through BBC restructuring and a series of art directors, one of whom only lasted weeks. Somehow I survived working for the Radio Collection on these and other titles through it all and into the new millennium.

It was August 1996 before I delivered the final, and possibly the best of the non-allegorical covers of the sequence, The Last Battle. It was not be end of my connection with Narnia as I was to discover the following year. 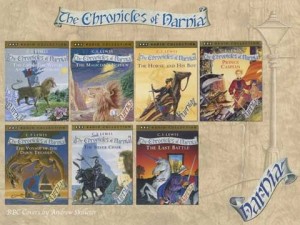 A shift in editorial direction led to a change in my brief for the third cover, The Horse and His Boy. They wanted a more narrative approach appealing to children; my Narnia scroll would remain but situated on the right hand side of each cover.

In 1994 a makeover was introduced to give the covers a unified identity and as a consequence I was commissioned to produced a The Chronicles of Narnia title scroll and lettering plus individual spine motifs for all the seven covers. When the cassettes spines were placed together it would spell Narnia, the final spine icon featuring Aslan’s head.

All the cover inlays were redesigned with stylish graphics using my art, designs and textures. They were also reissued as part of the BBC Young Collection targeted at the younger children’s market with a blue header instead of the Radio Collection’s gold. I even had to paint a new brighter version of the sky area for The Lion, The Witch and the Wardrobe, as a separate pice of art, which was digitally integrated with the existing cover art.

In 1995 I was delighted when The Radio Times used one of the covers for a feature and the cassette covers themselves featured regularly in Radio Times promotions.

I can only applaud the dedication and imagination of the then editorial and art team for giving this classic such care and attention and allowing me my creative head. It remains a special achievement for me, even if the Radio Collection have decided to replace my covers. We all cared about what we were trying to achieve.

In early 1997 I was approach with the icing on the cake. BBC Radio Collection had decided to create a collector’s boxed set for the complete Chronicles, an audio treasury. It would take the form of a wardrobe complete with opening doors holding all seven cassette cases. This was illustrator heaven for me and represented the Radio Collection at its creative peak.

Great credit must go to Ellen Wheeler who headed up the external design team (The Town Group) who were then responsible for the packaging of The Radio Collection. She was highly professional, positive and a joy to work with. Ellen had a real vision for the box concept and fought hard to realise it as she and I wanted. In the end she achieved most of our goals but not the scene of Narnia that was to be on the inside end panel of the wardrobe. Nor could she maintain the vision of ‘reality’ for the wardrobe as other parties thought it lacked colour and should feature full colour elements on the exterior, taken from a number of my covers. These were introduced with sensitivity and she saw to it I was paid an extra fee for their usage. My ‘Chronicles’ title scroll would be also be used.

All the imagery including within the decorative borders are derived from the Narnia stories; devotees can spend hours identifying the visual references. I had to create ten pieces of artwork for the box including the architrave and the door interiors, featuring a number of coats, scarves and belts.

We decided on a light oak colour and I devised a technique laying down a gouache texture on a smooth CS10 illustration board, over the pencilled designs and then modelling and ‘washing out’ the colour. I used a fine brown mechanical pencil lead to help create the wood effect and to point up the ‘carvings’; this was a crucial part of the overall effect. Finally I used a limited amount of body colour to create the illusion of relief.

In addition I also had to replicate the ‘Chronicles’ title in wood effect relief for the architrave at the top of he wardrobe. This was another ‘attention to detail’ touch that Ellen had successfully achieved. The graphics were sensitively done, the typography settling nicely into my artwork.

The result was excellent; a quality product, robustly constructed, with opening doors. I am still immensely proud of this achievement. 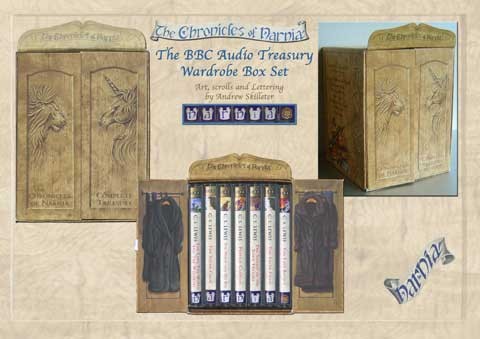 C S Lewis once said, “For me all fiction begins with pictures in my head,” and that was particularly true of the seven books for children that are collectively known as ‘The Chronicles of Narnia’.

When I was given the opportunity to adapt these stories for radio I wanted the resulting broadcasts to make pictures in the minds of my listeners. But when those programmes were marketed as audiocassettes, they obviously needed the help of pictures to sell them to a new audience. I considered myself very fortunate to have had Andrew Skilleter create those pictures.

Although the title of The Lion, the Witch and the Wardrobe tells you at once that the lion in question – Aslan, of course – is central to the story, the role of the lion in the remaining volumes is sometimes less easily defined and, in one or two of them, he seems – at first glance – to play hardly any part at all or, perhaps, only in the concluding chapters of the book. What becomes clear, however, as the history of Narnia unfolds, is that the underlying all the stories is the nature and power of Aslan.

This is something that Andrew Skilleter grasped in making the artwork for these audio versions. It is most evident in his symbolic designs for the first two adaptations. For The Magician’s Nephew the artist depicted Aslan bringing life to the barren world of Narnia, the musical notes of his creation song becoming plants and birds in the new world.

Similarly, for The Lion, the Witch and the Wardrobe Aslan is shown straddling two landscapes: one covered in snow from the perpetual winter imposed by the White Witch, the other a verdant spring garden freshly awoken by the returning Lion.

The other five paintings reflect Aslan’s constant presence in the drama: almost as a vision in the desert dust behind the eponymous characters of The Horse and His Boy; as an heraldic image on the sail of the ship in The Voyage of the ‘Dawn Treader’; as an observer (perhaps unseen) of the action in Prince Caspian and The Silver Chair; and for the final volume, The Last Battle, he is to be seen standing on the threshold of the doorway between the dying land of Narnia and the inner world of Aslan’s Country.

Andrew Skilleter brought to these pieces of artwork – together with the slipcase for the collection in the form of an elaborately carved wardrobe (lined with fur coats) – an intelligence and a sympathy that complimented the telling of these much loved tales, coupled with a sensibility as a designer for creating intriguing images that invited the listener to discover the story behind the pictures

Brian Sibley is a writer and broadcaster. He adapted C. S. Lewis’s The Chronicles of Narnia for Radio 4 and wrote Shadowlands: The Story of C.S. Lewis and Joy Davidman. He is the author of the The Lord of the Rings: The Making of the Movie Trilogy and other books accompanying The Lord of the Rings and the official biography of the films’ director, Peter Jackson. Brian’s latest book The Hobbit: The Battle of the Five Armies – Official Movie Guide was published on 20 November 2014.

Buy the Chronicles of Narnia Limited Edition Prints and Artwork